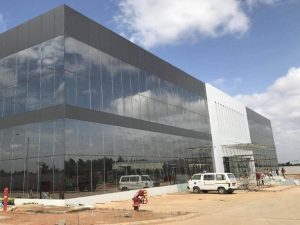 Born April 4, 1836, William Gleason came to America from Borrisokane, County Tipperary, Ireland, with his mother and brother when he was a lad of fifteen. He acquired his training through apprenticeship as a mechanic in the Rochester machine shops of Asa R. Swift and I. Angell & Sons and during the Civil War worked at Colt’s Armory in Hartford, Connecticut.

Returning to Rochester in 1865, William Gleason began his own machine shop, which evolved into The Gleason Works and ultimately into the publicly held Gleason Corporation. Originally his firm manufactured a general line of metal working tools and machines, with special emphasis on engine lathes and planers.

In 1874, William Gleason invented the first bevel gear planer. This development proved to be the beginning of a new industry – the bevel gear industry – and opened vast new possibilities for the transmission of motive power.

As a fitting tribute to William Gleason’s accomplishments and memory, a large bronze tablet was placed at the head of the stairs in the entrance lobby of The Gleason Works in 1931 where it resides today. His character is well summed up in the inscription on the tablet which reads:

The original location of The Gleason Works was on Brown’s Race, overlooking the Genesee River, along whose banks practically all of the local industrial activities of that time were placed. The area is now known as High Falls and has been developed as a historical district. The present site of the Gleason Works on University Avenue was acquired in 1904 and the first building erected in 1905. By 1911 the activities of the Company had so exceeded the space available on Brown’s Race that the decision was made to transfer all of the plant to what became known as 1000 University Avenue.

In the earliest years of the Company three of William Gleason’s four living children worked in the Shop. The oldest, Kate Gleason, began at the age of eleven years to help her father with the bookkeeping. Later Kate entered Cornell University to study engineering, the first woman in that institution’s history to have done so. Unable to manage without her assistance, her father reluctantly called her home before graduation. Although disappointed at the time, Kate was later to remark that it had been a blessing in disguise as it afforded her the opportunity to learn the machine tool business from top to bottom. She served as Secretary-Treasurer of the Company and was the chief salesperson from the age of twenty five and for many years thereafter. In 1893, at the age of twenty seven, Kate traveled unaccompanied to Europe by cattle steamer and secured orders for Gleason machines from companies in England, Scotland, France and Germany. In 1917 she was the first woman to be elected to membership in the American Society of Mechanical Engineers.

James and Andrew Gleason followed their sister to Cornell and ultimately into the business. Andrew C. Gleason, whose primary interest was in the gear design and manufacturing phase of the business, served as vice president until his retirement in 1934. James E. Gleason concentrated upon machine design and production and later became president. His outstanding ability and contributions in the design of improved types of bevel gear machines, in manufacturing techniques, and industrial relations are in large part responsible for the pre-eminent position enjoyed by the firm today. James E. Gleason died in his office at the age of ninety-four.

Today, Gleason Corporation operates within one business segment. The principal activity is the design, manufacture and sale of machinery and equipment for the production of bevel and cylindrical gears. The Company manufactures a complete line of machines and tooling for bevel gears. Bevel gears transmit power at an angle, such as from the drive shaft to the rear-axle of a vehicle. The Company also manufactures machines and tooling for producing cylindrical gears.

Cylindrical gears transmit power in a straight line and have a variety of applications, including transmissions of front wheel-drive vehicles. The Company’s major customers are in the automotive and truck industries, which normally account for three-fourths of its total sales each year. Other industries served include aerospace, construction, farm and marine. The Company’s markets are worldwide: historically two-thirds of total sales each year have been to customers located outside of the United States. Gleason Corporation operates manufacturing plants in China, Germany, India, Switzerland, United States, as well as affiliates in Japan, with sales and service offices throughout the world. James S. Gleason, grandson of Andrew C. Gleason, is Chairman of Gleason Corporation.